Epoxy resins are used in many application, from art to the industrial sector (1).

Epoxies (and its Bisphenol components e.g. BPA) are used in almost every part of our daily life, automotive and marine coatings, water pipes, flooring, paints, electronics, lining tins for tinned foods (2,3), and even some thermal-paper receipts we stick in our pocket when out shopping (4,5,6). 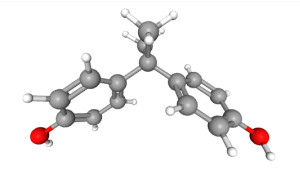 With all this BPA around, should we be worried?
No need to go shopping in full PPE gear, or wear it when eating a tin of baked beans on the freshly painted bonnet of your car! Just be aware and take care, especially when using the uncured materials. All resins and hardeners show warnings and recommend safety gear when working with the raw materials. More will be explained on Food Safe Epoxy Resin and applications in a future article.

… For Key Points, see the end of the article…

The first epoxies were created by two scientists, Dr Pierre Castan and Dr Sylvan Greenlee in the 1930, used for dental fixtures (1,2) and later became widely used as adhesives. Most epoxies resins are industrially produced petroleum derivatives and most commonly created with Bisphenol A and epichlorohydrin (1). Bisphenol A (BPA) has been around for a long time, first synthesized by a Russian chemist in 1891 (7) and only much later, in the 1950s revolutionized the plastic industry. The BPA (resin) is mixed with a hardener chemical (most often polyamines, aminoamides or phenolic compounds), which reacts and bonds it into a network (the “curing process”) with strong mechanical properties (1). This cured product is often called epoxy resin or just epoxy (although the actual epoxy resin is really the liquid part). And if you want to see how the chemistry works, see the lovely simplified article of “Making Epoxy Resin“.

“Cured epoxy resins do not pose any risk to human health when handled in a professional manner and following the necessary safety measures.” Quote from Epoxy Resin Committee, Europe (1)

The risk of handling epoxies is via skin contact, when mixing and handling the two components, epoxy resin and hardener. Material safety data sheets should always be available and note the warnings on the containers. Epoxies can be handeled safely when taking these precautions (1).

Leached Bisphenol A (BPA) was discovered to have weak estrogenic hormone-like properties (3) in the early 1990s (7,5) thus having hormonal active effects when ingested or absorbed. It has been associated with numerous diseases in humans (8) and other living organisms, as discovered  since then. Many countries have banned BPA (or associated components) in baby products, especially bottles, as the minute amount of BPA leaching out when a baby bottle or drinking cup is warmed in a microwave, could possibly affect the developing hormonal systems of babies (7,3). Small amounts of BPA leached from food or beverage containers are often ingested by all of us, daily (5).

Of all the BPA produced in the world, more than 99% is converted into polymers, mainly epoxy resins and polycarbons (8).  Of this, about 20% is used as a component in epoxy resin (5). “Several high quality migration studies on BPA, which included daily use conditions such as heating, microwaving, machine-dishwashing, rinsing, sterilizing, have repeatedly shown that migration from BPA-based polycarbonate is very low and far below the safety levels set by the authorities. It does not pose a health risk to the consumer under normal handling and use of the products.” Quote from Bisphenol, PC/BPA Group of the industry association PlasticsEurope (8).

The debate on the actual effect of BPA on humans continues. A comprehensive scientific evaluation done by the European Food Safety Authority (EFSA) in 2015 concluded that “scientific knowledge of how BPA behaves in humans was still unclear and there was no single explanation for how BPA potentially affects humans. Therefore, based on the WHO criteria, it was not considered possible to conclude that BPA is an endocrine disruptor”(9). These ideas are constantly challenged. No safety limits have been set for BPA in New Zealand. Safety limits are levels of dietary exposure that are without appreciable risk for a lifetime of exposure (3).

:: What about alternatives for BPA?

Many alternative chemical compounds have been proposed and is currently in use in epoxy resins, for example* Bisphenol F (BPF) and Bisphenol S (BPS) (5). Both these have been claimed to be safe. Although initially thought to be safe alternatives to BPA, more recent research is showing this not to be the case and the alternatives BPF and BPS can have the same toxic outcomes (5,10). For example, prenatal BPF exposure is associated with decreased cognitive function in children at 7 years, with significant associations in boys (11). BPA substitutes such as BPS and BPF have similiar structures to Bisphenol A and appear to have similiar potencies and actions. BPA substitute-based products (e.g. some epoxy resins used in art) are advertised under the guise of “BPA-free.” This term gives the impression that the products are safe when it is not (12). Most literature has been focussed on BPA and its only now that the new kids on the block, BPF and BPS, are being researched more comprehensively that we are finding them to have the same or similiar toxic effects (10,12).

The BPA used in most epoxy resins is a bit different!
BPA is most often combined with another chemical, epichlorhydrin, creating Bisphenol A diglycidyl ether (also known as BADGE) which is a completely different molecule with its own unique properties, and not just a mix of BPA + epichlorohydrin. It is less harmfull than pure BPA as shown by the warning icons in the schematic below (2). 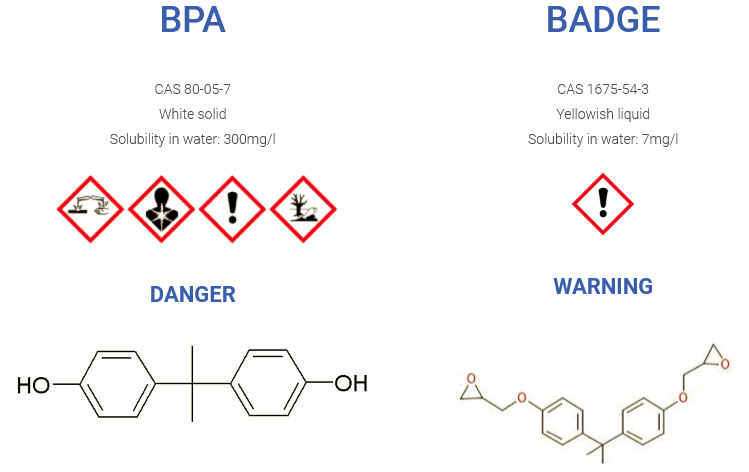 :: But my resin SDS does not state BPA or Bisphenol?

Are you sure?
Any chemical substance can have many different synonyms, and the way it is described can be very confusing. Basically, all epoxy resins contain some form of bisphenol base, usually BPA.

Examining the Safety Data Sheets (SDS) of some epoxy resins commonly used in New Zealand resin art, we find they do contain BPA:

BPA is such a versatile component, with its incredible properties, which can be manipulated by reacting with other compounds to create a vast array of substances that can be used in industry and products. It is daunting task to find a replacement.

Some companies make claims of no BPA or any Bisphenol products, so how can we believe them?

→ Epoxy resin and the environment – do you get “green” resin?
→ Food safety, regulations and certification of Epoxy Resin.

*  Other variants include BPG, BPAF, BPE and many more.

Epoxy resins have a wide application, from artwork to adhesives. Keeping its colour is important.

Resin on its own remains a liquid, unless it is mixed with a second important component, the hardener. The reaction causes a hard, cured network (1) the epoxy resin we are so familiar with in our art, jewellery, or other resin projects. Commercial epoxies often contain additional components such as plasticizers, accelerators or trace impurities which in itself may cause yellowing (2), whereas epoxy resin created for art generally don’t have these impurities.
Epoxy resins will eventually yellow, even under room temperature, with or without light exposure and hastened by humidity (1).

When does the yellowing occur?

There are mainly two types of yellowing of epoxies.

:: Yellowing of the hardener

The main cause for yellowing of the hardener (1) is carbonyl formation (carbon and oxygen =C=O) in the epoxy backbone due to thermo-oxidation (3). Amines in the hardener are oxidised (i.e. oxygen added) when air comes in contact with it, either during the bottling process or even when oxygen penetrates the plastic container. Thermo-oxidative aging can be described as a “slow, controlled burning” of the material, thus HEAT (warm environment)+FUEL (the hardener components)+OXYGEN (in air) (5). Take one away, e.g. oxygen, and the process stops.

The yellow colour becomes darker over time, similar to a peeled apple going brown. Even the slight moisture in the air can hasten the process.

→ Can hardener that has yellowed still be used? A definite YES.

This yellowing is not a problem as it does not affect the curing properties of the mixed epoxy resin. Nor does the yellowing continue once mixed. It becomes inert once cured and the hardener no longer reacts with oxygen. The yellowing seen in a hardener bottle looks worse as it is seen in bulk volume, by the time it is mixed it will not look as yellow.

UV light is the most common cause. The UV light, part of natural light, excites the molecules and cause them to break down. This may even continue after removal from UV exposure (5). Direct sunlight is the biggest culprit in yellowing of cured epoxy resin.

→ Can this yellowing be blocked? To a certain degree.

All epoxy resins will yellow over time, some faster than others. Many epoxy resins used in the industrial and marine industry do not have yellowing blocking agents, as yellowing is not important in their application.
In contrast, art epoxy resins should retain its clarity and special formula epoxy resins contain:

By selecting art resins that have special formulation to prevent yellowing, removing UV light or using colour pigments to mask it, yellowing can be minimised. Understanding these processes a bit better now, will make the next resin project easier.

Apply all or use only the tips that are practical and make sense to you.

Join Waitlist We will inform you when the product arrives in stock. Please leave your valid email address below. (* required)